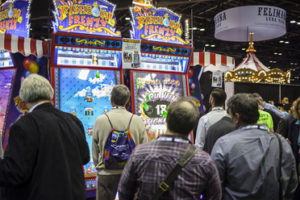 Team Play’s Booth 2000 is right inside the Main Entrance of IAAPA. You’ll recognize it when you see the neon green cameras flashing atop the Fun Stop Photos photo booths, 3D fish and lobsters inside of goldfish bowls, and a huge crowd. “There are over 1,000 companies and 28,500 attendees here at last count,” said Team Play owner and CMO, Frank Pellegrini.  “I think that most of them have been here to check out Fishbowl Frenzy and Fun Stop Photos!”

If you haven’t ordered your Fishbowl Frenzy redemption games and Fun Stop Photos photo booths, catch up with your competition and get your order in the queue!  Go to www.teamplayinc.com to find a Team Play distributor near you.

In the meantime, the lobsters will dance as 3D fish jump for joy, because being declared IAAPA’s “Best New Coin-Op Product” is worth celebrating!

For information about Fishbowl Frenzy, check out Team Play’s web site at www.teamplayinc.com.