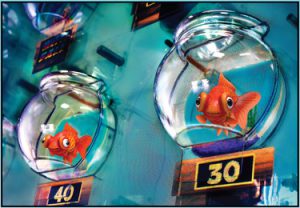 Orlando, Florida, Nov. 19, 2014  – Team Play is delighted to announce that Fishbowl Frenzy™ has won the 2014 Brass Ring Award for “Best New Product” in the Coin-Operated Arcade and Redemption Equipment category at the IAAPA Attractions Expo in Orlando, Florida.

“We are absolutely thrilled that Fishbowl Frenzy has been recognized with the Brass Ring Award,” said Team Play principal Frank Pellegrini.  “IAAPA is an excellent organization, and they put on a fantastic international show that grows every year, with over 30,500 attendees in 2014.  We are so honored that Fish Bowl Frenzy won this award!”

Prior to its official release at IAAPA, Fishbowl Frenzy™ had already caused quite a stir among those who caught a sneak peek of Team Play’s new augmented reality ticket redemption game while overseas at EAS and ENADA.  And, there was plenty of excitement in Orlando, Florida, where Fishbowl Frenzy debuted to an enthusiastic crowd.

Strictly a game of skill, Fishbowl Frenzy™ combines advanced technology, mechanical skill play, exceptional video graphics and adorable fish characters with a carnival theme, to create a terrifically entertaining game – the likes of which have never before been seen.  The game challenges players to carefully time their release of a ball which bounces through a field of pins into one of the actual fishbowls below.  Adorable, computer-generated 3D fish celebrate each win, spinning and jumping with enthusiasm.

Fishbowl Frenzy’s unique game play is achieved by using a 65 inch transmissive LCD monitor.  Players can see through the translucent screen to watch the ball drop, eagerly waiting to see where it will splash and how many tickets they will win.  The game play is easy to learn and highly entertaining.

Test earnings of the prototype placed Fishbowl Frenzy solidly within the top ten earning redemption games, with its ranking climbing every week.  The consensus among everyone who has seen Fishbowl Frenzy is that it is an exceptionally great game.

“We keep hearing that this is probably the best redemption game ever created,” said Team Play’s Chief Operating Officer, Ed Pellegrini.  “Winning the Brass Ring Award further confirms what we have been told over and over – that people love this game.”

Team Play started fulfilling the pre-production orders for Fishbowl Frenzy in early November, shipping in the sequence that orders were received.  So, if you haven’t ordered your Fishbowl Frenzy yet, catch up with your competition and get in the queue!  Go towww.teamplayinc.com to find a Team Play distributor near you.

In the meantime, the lobsters will dance as 3D fish jump for joy, because being the “Brass Ring” best new coin-op product at IAAPA is well worth celebrating!